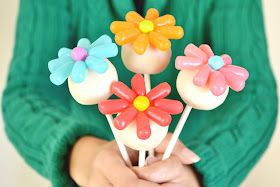 It always starts out simple enough.  I offer to make a dessert for a friend's party.  I imagine something quick and delicious.  Something that looks flawless and tastes perfectly decadent.  Something I whip up in no time.  Next thing I know, it's 3 a.m. and I'm molding tiny Minnie Mouse hair bows out of sugar paste..  This time, I promised myself it wasn't going to go down like that.  I was going to make a sweet lil' something to bring to a darling friend's baby shower.  It was going to be quick and delicious.  And it wasn't going to leave me with pink, alien hands.

So the weeks before the baby shower, I did some research for the spring themed baby shower.  And I came upon these flower pops.  Once again, Bakerella had saved the day.  Everything was on track.  Except I didn't have those darn pastel colored candy corn.


Now, I could have used any candy for the petals.  M&Ms, Skittles, even jelly beans.  But part of the problem is that I'm somewhat neurotic and a bit of a perfectionist.  Actually no, that's the entire problem (one amongst many problems, but we'll save that for another post).  I have high expectations of my homemade treats.  I don't want to be one of those people that gives friends hideous one-armed sweaters as gifts after becoming enamored with knitting or bakes people lopsided, undercooked cakes with wonky frosting roses after a tragic encounter with a cake decorating clas at Michaels.  I want my treats to be worthy of the pages of Martha Stewart or Amy Atlas.  They rarely (ok, never) are but I figure so longer as my friends aren't forced to grit their teeth and force maniacal smiles as I hand them my homemade treats, I have, at least partially, succeeded. 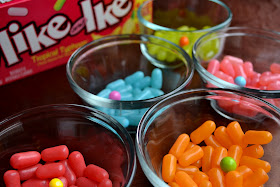 And so began the quest for finding the spring colored candy corn that Bakerella uses.  I went to every drug store possible, ever specialty candy store around, and even went to my local health food store (because well, the search for the perfect candy was making me lose my grip on reality).  And what did I get?  Bupkus.  Finally, I happened upon some Tropical Mike & Ike candy.  Think regular Mike & Ike but in pastel colors.  Granted, the lack of a flat base would make 'em a bit more precarious perched on a cake but they were the right colors.  And that was all that mattered.


All that mattered until I found myself feverishly gripping the basket filled with cake pops on the drive to the baby shower.  Every bump in the road brought those darn Mike & Ike petals closer to each other.  And every time they banged into each other, one petal lost its life in a terrible version of "he loves me, he loves me not."  You know how hard it is to hold a darn basket filled with cake on sticks?  It is hard.  You know how hard it is to keep them crazy scraps masquerading as grass in the basket as the hubster weaves through traffic like he's driving in the Malibu Grand Prix?  It is super hard.  And you know how hard it is to be in a freezing car with no heater because you're worried heat will melt the pops?  It is supercalafragalisticexpialladocious hard.


Needless to say, I didn't eat any cake pops at the party.  After all that work, including the nail marks permanently embedded on my palms from gripping that darn basket, I almost didn't let any of the guests eat the pops.  But then I realized, this was only the latest in a series of cake pop debacles.  Lord only knows what round three holds! 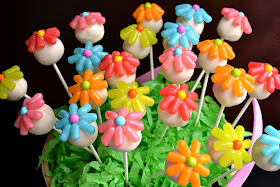